Are duplicates automatically removed when emails are sent?

With SimplyCast, there are two ways you can send emails to contacts in the CRM: either through the Email tool or using SimplyCast 360.

Email
Within the email channel, duplicates are automatically removed. However, within this channel, you are limited to sending to a maximum of 10 lists. The email campaign sends once all the emails have been sent.

SimplyCast 360
Within SimplyCast 360 there is an element called the Remove Duplicates Contacts, which will stop a contact from being passed through that specific point in the campaign more than once. This means they would not receive a message more than once.

By default, SimplyCast 360 does not remove duplicates without this element. This is so that campaigns like "Happy Anniversary", debt collections, or customer loyalty can run the same contact through it more than once. This allows campaigns to stay on for many years without maintenance.

Here are a few examples of how to use a Remove Duplicate Contacts element in your SimplyCast 360 campaign.

First, add this element to your campaign before the message you want to prevent sending duplicates. 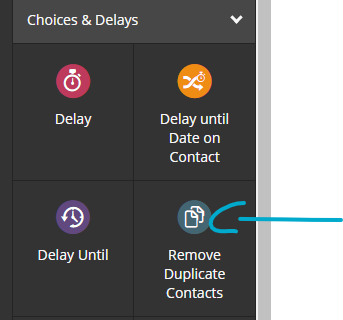 Once in the campaign, click on the element to bring up its settings.

Choose the manner in which you want duplicates removed.

Then connect the element as needed.

with your friends
and colleagues

How do delays work?